Lake Eymir (area: 1–1.3 km2, average depth: 3.2 m, maximum depth) and Lake Mogan (area: 5.6–8 km2, average depth: 2.4 m, maximum depth: 2.8–5.3 m) are connected alkaline lakes (average alkalinity> 6.5 meq / L for both lakes). Lake Eymir (39◦570 N, 32◦530 E) and Lake Mogan (39◦470 N, 32◦470 E) are located 20 km south of Ankara and at an altitude of 970 meters. Although they are physically located in the Mediterranean climate zone, the high (> 1000 m) plateaus of Anatolia show deviations from the Mediterranean climate. The lakes are predominantly under the influence of the Mediterranean climate, hot, dry and long summer periods starting in June and lasting until November and the arid-cold steppe climate of Central Anatolia. Unlike the Mediterranean climate, cold and snowy winter periods are also observed frequently (Peel et al., 2007). Although the average annual temperature in the region is 12 ° C (lowest -8, maximum 36 ° C), the temperature has slowly increased in recent years (average temperature was 11.2 ° C in 1980 and 13.4 ° C in 2018) (Coppens J. et al., 2016; Turkey Meteorological Agency). The average rainfall in the basin is approximately 408 mm (<350 mm in dry periods, > 500 mm in wet periods). In summers, the amount of water evaporation in the lakes is significantly higher than the amount of rainfall. Periodic droughts that occur in this way cause significant changes in lake water level during the year and between years. As a result, the basin where these two lakes are located is classified as a Mediterranean climate zone due to the hot summer periods that shape the hydrological structure of the lakes despite the cold winter periods (Beklioğlu M., 2017). 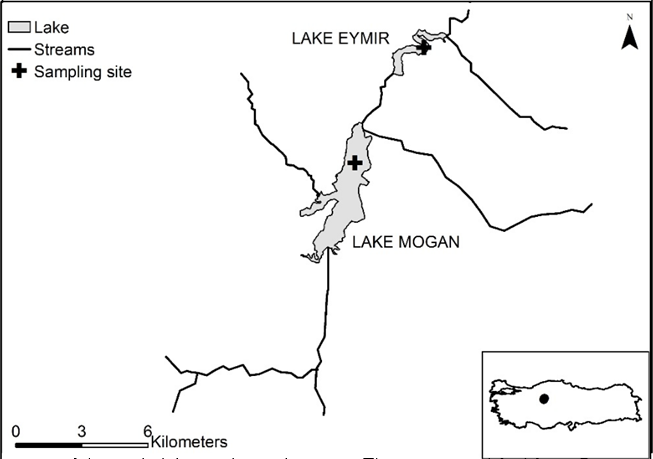 The basin where the lakes are located covers an area of 1010 km2. 68% of this area is mainly composed of agricultural areas where dry wheat is cultivated. Although urbanization around the lakes is intense, the lakes are rich in wildlife and biodiversity. One of the 16 special environmental protection areas in our country is the "Gölbaşı Special Environmental Protection Area" which contains these lakes. Lake Mogan has also been declared "Important Bird Zone".

Lake Mogan, which is located above, is fed both from groundwater and surface water, and it has 4 main streams flowing throughout the year, 3 of which are inflows and 1 is outflow, and many lots of short-lived streams. The outflow of the lake has been controlled since 1974 due to flooding. This current of Lake Mogan is the largest inflow source of Lake Eymir. In addition to the Mogan inflow, Lake Eymir also has another inflow, which is fed by groundwater and surface water and it is observed only in spring season (Kışlakçı). The only outflow of Lake Eymir is also controlled like in Lake Mogan (Beklioğlu, 2017).

In 1997, Lake Mogan was abundant in aquatic plants (abundant Chara deposits and water grass (Stuckenia pectinata)) with low chlorophyll-a (Chl-a) values (8.8 ± 2 µg · L − 1) and average total phosphorus (TP) concentration (63 ± 5 µg · L − 1). Lake Eymir was clean enough to meet the drinking water needs of Middle East Technical University before 1970s. However, between 1970 and 1995, there was a deterioration in water quality in both lakes by the introduction of untreated sewage into the lakes. In 1995, a system was established for the treatment of waste water, and the wastes of a few restaurants around Lake Mogan were controlled and the phosphorus input was reduced by 88% by then (İmamoğlu, 2017; Beklioğlu, 2017).

Lake Eymir and Mogan ecological monitoring research was continued for 20 years by METU-Limnology Laboratory and it is the first and only long-term and continuous work for freshwater research done in Turkey. Thanks to these studies, effective restoration studies have been carried out to reduce eutrophication in these lakes. Hydrological data, which are very important for lake ecosystems, could be followed in detail by these long-term studies (Beklioğlu et al., 2017). During this period, a lot of scientific content was produced with the collected data and lots of researchers were educated. Since March 2019, these studies have been continuing within EKOSAM. The objective is to ensure the continuation of the 22 years long-term monitoring of Lake Eymir’s ecosystem and the Gölbaşı basin to which this ecosystem is connected, to identify the elements that threaten the ecosystem and its services, to understand the consequences of climate change and to prevent them or to increase the adaptation to them, to protect the rich biodiversity of lake ecosystems and to provide scientific data for all of these objectives.